Located in the Alexandria Hotel, set back from the street entrance on South Spring Street in downtown L.A., The Gorbals is home to Season 2 “Top Chef” winner, Ilan Hall. With its unassuming entrance, you would have no idea that this contemporary dimly-lit small plates eatery exists behind the large wooden door. Across from the Down and Out bar, The Gorbals transcends any expectation of typical food. The menu’s pleasantly witty candor represents the restaurant’s rebellion against common food pairings. The different dishes on the menu are separated by the different types of meat (or lack thereof): pig, cow, bird, aquatic, herbivore, and sweet. Even though the menu and design of the restaurant is more simplistic, the food is anything but. 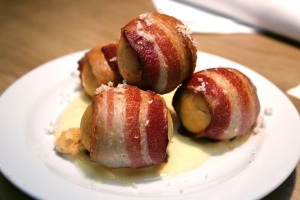 Since I like bacon (and I happened to work for a bacon company), I was drawn to The Gorbals for the seemingly blasphemous Bacon-Wrapped Matzoh Balls. “Seemingly” because I like foods that push boundaries, especially when it comes to bacon. And Jewish food! (My Dad, is after all, Jewish.) Combining something kosher with, well… something not; was definitely worth a trip, taste, and satisfied curiosity. I had the pleasure of a quick chat with Chef Hall while his son playfully skipped around the long, communal wooden table my coworker and I parked ourselves at. Facing the open stainless steel bar, we could see where the Chefs created their magical dishes in the kitchen.

We ordered a couple “Desperate Housewives” to sip on while we perused the menu with tickled expressions. Ilan Hall, born to a Scottish father and Israeli mother, described how the Bacon-Wrapped Matzoh Balls were established. It was a Jewish friend’s birthday party and he wanted to present something that was considered “out of bounds” and a little tongue-in-cheek; a contradictory pairing of sorts. He wanted to take something kosher and forcibly penetrate its ceremonious laws with a forbidden meat. Well, in his words: “I wanted to take something kosher and rape it with bacon!”

The Bacon-Wrapped Matzoh Balls arrived and we anxiously dug our forks into the blasphemous- bacony- balls. The combination of the matzoh ball and bacon was incredibly pleasant. It had never felt this good to sin. As we chatted about bacon in all of its glory, Chef Hall recommended that we try the Naked Cowboy oyster with crispy smoked lardo, and horseradish mignonette. How could we say no? A culinary creation from Ilan Hall involving bacon was definitely a must-try. We were not disappointed. The glossy, buttery flavor of the oyster complemented the saltiness of the lardons, which was quickly followed by the clean burn of the horseradish root.

However, the bacon paradise didn’t end there. For dessert we tried the Bacon Cheesecake with Bourbon Cream. This delicacy was created by Chef Lizi Freeman and she definitely knew what she was doing. The cheesecake took our taste buds into bacon euphoria. It was an erotic combination of salty, smokey, sweetness that deepened when the bourbon cream caressed our tongues. And what probably made the bourbon cream so erogenous was the fact that this cream is made with bacon fat as opposed to butter. When you visit, The Gorbals, even if you order the half cut roast head of a pig and think you don’t have enough room for more… You must order this cheesecake. Not only is it original, but it’s also one of the most delicious cheesecakes you will ever try.

Needless to say, my visit to The Gorbals did not disappoint. We were warmly greeted, pleased by the clean lines of the interior, and the food was completely worthy of our trek into the heart of Los Angeles’ Financial District. The Gorbals will definitely be getting a repeat visit from us. And if you plan on checking out this delicious restaurant, you should probably get out a couple of Abe Lincolns; do as the menu says, and buy the kitchen a round of beers. 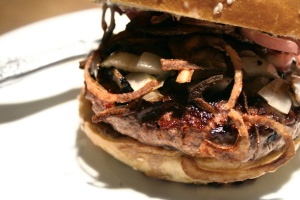